SIHH has come and gone, and though we didn’t partake in one of the watch industry’s most grandiose affairs, it was certainly amusing to pause for a minute or two and watch the coverage as it came in. Before SIHH commenced, we considered how the industry’s current hardships might temper this year’s show. Given what we have seen—with many of the introducing firms coming in solid and proud—you couldn’t ever have speculated that the business was amidst what some have called a droop, others the start of an emergency. Granted, SIHH isn’t exactly a fair cross-part of the business and its many market fragments, with the show slanted toward higher-end extravagance, and whether this year’s curiosities show viability on the market remains to be seen.

With that far removed, let’s get to the horological beautiful sight. There was certainly a great deal to crave this year, so we tapped individuals from our editorial team to each select one watch that remained to them. As always, let us realize what caught your eye in the comments area underneath. Enjoy!

Ressence keeps on pushing watchmaking forward through breathtaking plan and mind boggling technology with the creation of its freshest watch. It elevates the plan from its past watches by making the presently square case smaller, thinner and from stainless steel instead of titanium.

The strong black and white dial has been replaced with four dial tone options–silver, ruthenium, night blue, and champagne. The watch can be twisted by a switch that folds out from the back of the watch. The upgrades currently give a speedy set mechanism to the day of the week.

While the watch is a change from other models, the Ressence Type 1 Squared retains its eye-catching orbital time display. In contrast to other brands, Ressence keeps on dazzling with new models and enhancements that are advancing watchmaking.

The watch’s recently refined esthetic attracted me to the Type 1 Squared immediately. I didn’t think Ressence could develop its orbital display, yet they did. The new dials are as smooth as past models, yet Ressence made them feel more mechanical than tech. A real piece of watchmaking art.

For the 2017 SIHH, Audemars Piguet presented another variant of the Royal Oak for ladies with another sparkling finish named “Frosted Gold.” Commemorating the 40th anniversary of the ladies Royal Oak, this update is another collaboration between Italian-conceived, London-based fashioner Carolina Bucci and AP.

Ditching the traditional approach of placing diamonds on ladies’ watches, AP utilized Bucci’s signature gold finish utilizing the “Florentine technique.” Gold is hammered by hand with a diamond-tipped device to create a tactile, sparkly finish. It is a labor-concentrated approach that creates highly exceptional individual pieces. No two AP Royal Oak Frosted Gold watches will be alike because of the cycle. I like this latest from AP because there is usually little emphasis on women’s watches, both from brands and press. These are shockingly fresh, and something I’d want for my wife. 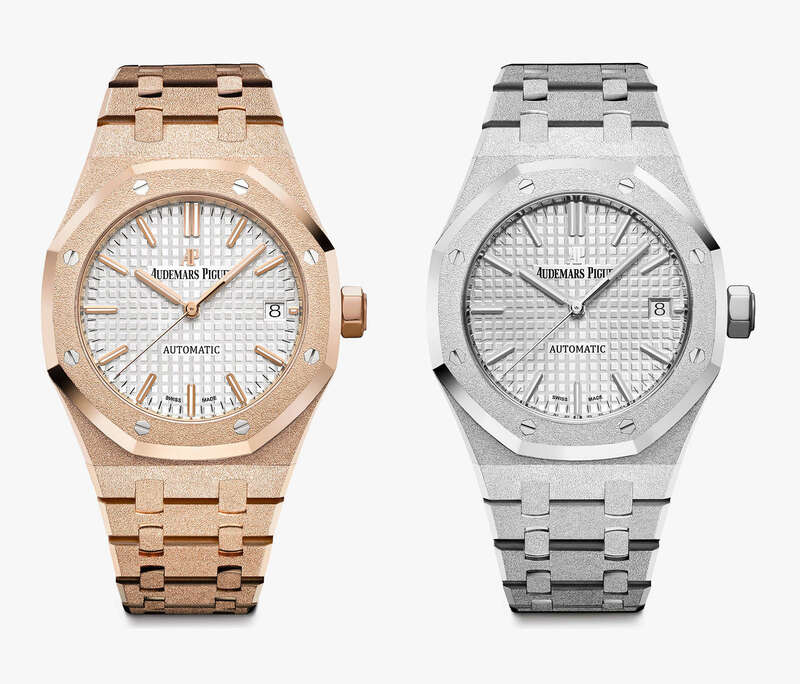 The watches come in 33mm and 37mm, the latter having an automatic Caliber 3120 and the previous fueled by a quartz Caliber 2713. There are also two metal options–rose and white gold. Other specifications incorporate a rhodium-conditioned dial with “Grande Tapisserie” pattern, white gold applied hour-markers and Royal Oak hands with radiant coating, 50 meters of water resistance, and a glare-sealed sapphire crystal.

Swiss watchmakers aren’t known for their nonconformity–at least, as far as their professional lives go. That makes Moser et Cie, the maker from Neuhausen am Rheinfal, stand out significantly more. Last year, they offered the well-monikered “Alp Watch”–a shocker of a mechanical watch with in excess of a passing resemblance to a certain notable wrist computer. There’s now an exquisite moment retrograde adaptation. Now that changes in legislation mean that a “Swiss Watch,” Moser’s Edouard Meylan has taken a stand; he’s eliminated the “Swiss Made” label from his watches. And this year at SIHH, Moser has launched a watch with a case made from Swiss cheese (and, to be fair, composite) to bring up that the “Swiss Made” label has lost credibility.

Backed up with a Star Wars-style looking over opening, the brand’s video for the 100% in house “Swiss Mad Watch” pitches them as “a band of revolutionary watchmakers” resolved to “make Swiss Made great again.” We’re not certain how many takers there will be for the restricted release of only 50 at $1,000,000 each in any case, as the video says, “may the constant power be with them.”

While I can certainly appreciate all the crazy complications and fancy doodads associated with the wild haute horology appearing at SIHH, it isn’t something that really grabs or holds my attention. The reality is that I will probably never claim any of these watches, so they’re a greater amount of an abstraction than anything else. However, there is one brand that always makes me slobber and scheme to figure out how to make claiming one a reality: A Lange & Söhne. This year my favorite watch from SIHH is easily the Zeitwerk Decimal Strike. The marvelously amazing Zeitwerk digital readout watch has been out for quite a while, including the Striking Time (chimes on the hour and quarter hour) and Minute Repeater variations. This year Lange has presented another one that has two unique chimes, one that chimes the hour in a lower pitch, and one that chimes on the 10s in a higher pitch.

Now, this may appear to be an odd complication, something between the Striking Time and the Minute Repeater, however it actually really works with the digital time display. It adds a musical component to the dial when you have two circles (ones and tens) switching throughout at the same time like clockwork. Obviously, while not a helpful complication, it is only flat out cool. The Decimal Strike is a restricted release of 100 and comes in the Lange proprietary “Honey Gold” shading which, according to those that have seen it face to face, is dazzling. And like all Lange watches, the back is transparent so you can admire the amazing masterpiece that is the movement. Offered at a simple $127,000, on the off chance that I had cash to consume, this is where I would start the fire.

Last year, Cartier came out with the Drive de Cartier, a staggering plan that took the brand’s conservative esthetic and modernized it such that refreshed what I presently think when I hear Cartier. It wasn’t groundbreaking in wording mechanical turns of events, yet it was certainly a watch that I could see myself wearing for quite a long time should I be so fortunate to possess one someday. For 2017, Cartier divulged the Drive de Cartier Extra Flat, a stripped-down, thinner and slightly smaller addendum to the Drive line. I really love the cleaner, almost immortal esthetic paired with an advanced case (presently 39mm versus the 40mm of the primary Drive). The less-jumbled dial also works here, as it gets rid of a portion of the extraneous embellishments of the freshman piece. Technically, it’s no slouch, either. Inside is a Piaget hand wind caliber. My lone caveat? The Drive Extra Flat is just available in gold. Given the overwhelmingly certain reaction to the plan, I hope a stainless steel variant isn’t excessively far behind.

Sometimes, it appears as though there is a backwards relationship among cash and taste. The more a thing costs, or the more cash an individual has, the less taste is available. I mean, simply take a gander at a portion of the world’s most costly watches. They might be mechanically brilliant, yet I honestly wouldn’t be caught dead with one on my wrist (I’m taking a gander at you, world’s lightest tourbillon split-second). In this way, when an extravagance watch comes along that is restrained, stylish and just all around planned, as odd as it sounds, it’s refreshing. One brand that appears to regularly do the unthinkable and make tasteful–albeit five-figure–watches is Laurent Ferrier. This year they out did themselves with the Galet Micro Rotor “Montre Ecole” (school watch), featuring another case plan and a just ravishing dial. The watch was motivated by the primary watch Mr. Ferrier made in school. The 40mm case features an adjusted, stone like place with a streaming domed bezel that is meant to speak to 19th century pocket watches. The central structure is contrasted by straight carries that further speak to these classical roots. While the case is attractive, it’s the dial that really does it for me. All metal with some basic printed graphics two or three applied markers, it accomplishes more finishing than most dials do with huge loads of fancy odds and ends. There are three primary areas: the central surface, chapter ring and sub-seconds. The central surface has vertical brushing, the chapter ring has radial, and the sub-seconds a blend of radial and concentric circle graining. Straightforward textural shifts change how light casts on them, creating visually unmistakable areas.

The primary file comprises of black lines the length of the width of the chapter ring for the hour and smaller lines for the minutes. And three, nine and twelve are nail-like applied markers that cut from the edge of the dial into the central area (similar markers can be found on the Galet Square) . These add some personality to the watch, helping to remember something from the era of streamline/art deco plan. The sub-seconds then features only four lines at the quarter minute. The proportioning of the sub-dial is great. It’s large, yet not overwhelming, and just nearly kisses the lower part of the dial, leaving barely enough space for the “swiss” text. Finishing it off are LF’s signature Assegai-shaped hands, which suit the dial impeccably. Overall, the dial has something raw about it and industrial. It’s not a particular extravagance watch dial, it’s the perfect dial for the plan. Obviously, you can’t talk about Laurent Ferrier without referencing the movement, which is ultimately the most beautiful feature of the watch. LF’s movement configuration speaks to the same restrained and tasteful esthetic. The 35-gem miniature rotor automatic has flawless, arcing lines, with large decorated plates with sloped edges and polished extensions. The topsy turvy gold miniature rotor with it’s unusual snail-shell shape stands as a visual highlight of the plan. For the “Montre Ecole” the movement is decorated “rougher” to speak the prototyping materials LF utilized on the watch that enlivened this model. Starting at $38k for the steel model, it’s improbable to grace my wrist any day soon, however hopefully brands can take inspiration from this dial, which shows how much you can do with basic tools.

w&w Instagram Round-Up with an Omega Speedmaster ck2998, a Seiko 7a38 and a Vintage MinervaNext Article