After presenting the restored Excalibur assortment recently, Roger Dubuis announces two new models for the Excalibur collection. There will be a jewel set Excalibur 36 with a new arm band and another chronograph, the Excalibur 42 Chronograph.

Roger Dubuis makes it simple: the number in the watch’s name represents the real diameter, so the Excalibur 42 Chronograph is a men’s size watch. This specific one highlights the in-house programmed chronograph development, type RD681, that is controlled by a miniature rotor.

Caliber RD681 has a segment wheel to enact the chronograph and presentations the emasured time on a 30-minute counter, situated at 3 o’clock. The run of the mill miniature rotor is made of tungsten, a hefty/thick material that can make enough rotating dormancy for keeping the fountainhead wound. The development has a force hold of about 52 hours.

Of course the degree of finish is of a serious level, precisely what we may anticipate from Roger Dubuis. The development likewise has been tried (and ensured) by C.O.S.C., the Official Swiss Chronometer Testing Institute.

Aesthetically we see the realized plan codes of the Excalibur line: the triple horns joining the wristband, the fluted bezel and the thin Roman numerals. The case is executed in tempered steel, anyway I wouldn’t be stunned in the event that we see more models at the SIHH 2013.

Another plan component that the new Excalibur 42 Chronograph imparts to other Excalibur models, is a staggering sun-beam finish! This is something you truly need to see yourself, ideally in sunlight. So a visit to a Roger Dubuis store may very well be a magnificent idea.

One of those stunning subtleties is that both the focal chronograph seconds hand and the 30-minute counter hand are made in dark covered steel. Other hands, demonstrating the time, are polished.

This article is composed by Frank Geelen, chief supervisor for Monochrome Watches . 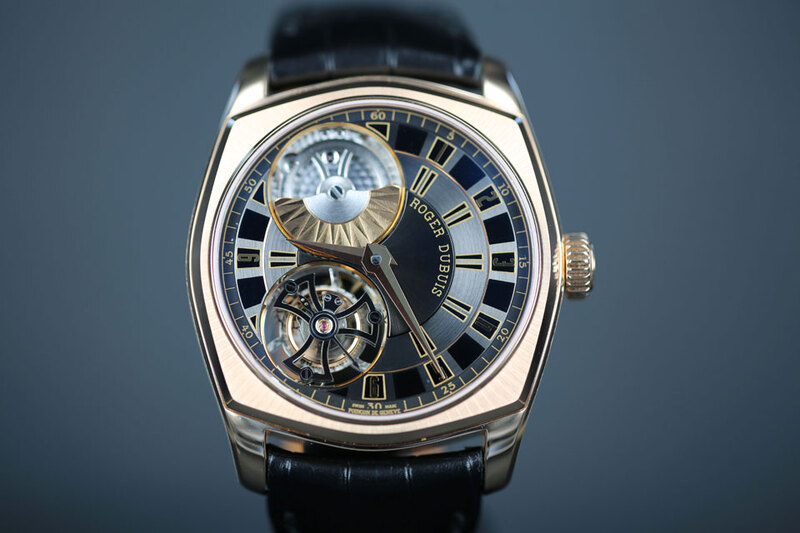